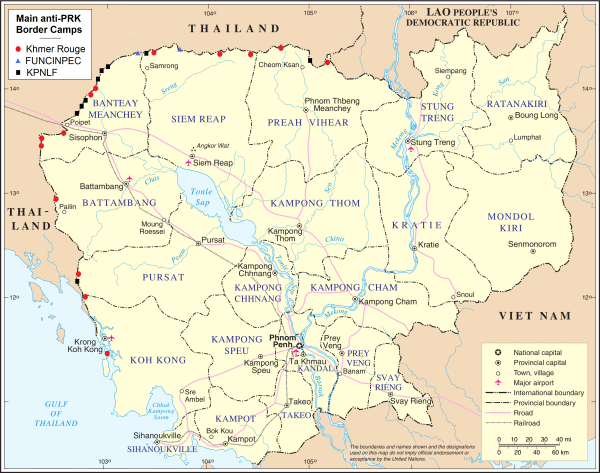 Cambodia has been heavily shaped by its past, particularly the brutal rule of the Khmer Rouge which lasted between 1975 and 1979. What many people do not realize is that the Khmer Rouge dominated  (CGDK; Khmer: រដ្ឋាភិបាលចំរុះកម្ពុជាប្រជាធិបតេយ្យ, Odthaphibeal Chamrouh Kampouchea Brachathibtey), renamed to the National Government of Cambodia and that they still retained the Cambodian seat on the UN until 1993, when peace was largely achieved. Alas this was not to the end of the Khmer Rouge.

With UN sponsored elections due to take place, the Khmer Rouge decided to boycott the elections whilst still controlling (at the time) up to 1/6 of Cambodian territory. The Coalition Government of Democratic Kampuchea thus dissolved, the Khmer Rouge fought on under this name, before forming their last “government in exile” and indeed the last Khmer Rouge state.

In 1994, the Coalition Government of Democratic Kampuchea morphed into the The Provisional Government of National Union and National Salvation of Cambodia (PGNUNSC). This was in opposition to the newly established Kingdom of Cambodia and was not recognized by any state, even their former backer – the People’s Republic of China.

Pol Pot officially did not hold any power in the The Provisional Government of National Union and National Salvation of Cambodia (PGNUNSC). In reality he was teh de-facto leader until being replaced by Ta Mok.

In 1997, Pol Pot ordered the murder of Son Sen and , which were respectively a success and failure. Following this, Pol Pot was arrested and sentenced to life imprisonment, until he died, allegedly of a heart attack, in 1998.

THE END OF THE CAMBODIAN CIVIL WAR

Within 3 months of Pol Pot’s death, the provisional government had been dissolved and the slow road to peace was to begin. The last Khmer Rouge state was at and end. Ta Mok, the last holdout and indeed last Khmer Rouge leader was eventually captured in 1999 ending any vestiges of a Khmer Rouge insurgency.

The main areas of its control were  and , with the place hosting surviving Khmer Rouge leaders and their descendants. It is possible to visit many sites related to the former government as well as the grave of Pol Pot.